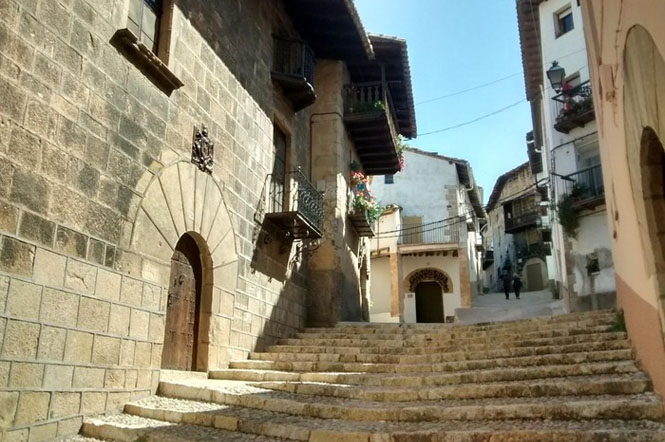 This was built in late 16th century and its stark appearance is due to the functional aesthetics of the façade. The building was restored in 1983 and was declared a site of Cultural Interest on 8 February of the same year.

The palatial home, dated from 1546, belonged to the noble Belsas family, who had possessions in Fuentespalda and Monroyo. The Renaissance style building has three floors and a peculiar gallery of arches finished with an eave. The family coat of arms appears on the façade.

The locals from Fuentespalda used to come here to cook their main staple: bread. All that has been preserved from the ancient building dated from the 14th century are the oven and the arcade in the entrance showing the coat of arms of the bishop of Zaragoza, lord of the village.

Interesting hydrological ensemble made up of two fountains. ‘La Font de la Vila’, dating from 1872 according to the inscription, but probably earlier, follows the Renaissance style of a drinking trough and basin. ‘La Font de la Canyella’ is a Gothic construction that was later extended.

This church is a prominent Gothic construction that was extended in the 18th century. It is one of the most representative elements of Fuentespalda, and also houses a majestic organ from 1680 that was expanded in 1704 by Francisco Turull, the acclaimed organist born in Cretas.

This defensive building was part of the Medieval walled enclosure. The lookout tower was used as prison in the 19th century, and the original shackles are still preserved inside. It has been restored recently and equipped as an exhibition centre.

The portal is the entrance through the Medieval wall, but a Baroque chapel with wooden ceiling was built over it in the 18th century. Of the four portals in Fuentespalda, only this one and ‘Portal de San Francisco’ have been preserved.

In this eighteenth-century chapel, we find in the entrance atrium several graffiti, probably made in the eighteenth and nineteenth centuries. You can see the remains of an oil mill next to the hermitage. Near here, remains of an Iron Age necropolis were found. On the Saturday closest to April 28, the saint’s day, a pilgrimage is celebrated in the hermitage.

From the 18th century, it is a baroque work whose construction was completed in 1787. On September 29, a pilgrimage is celebrated in the hermitage during which pastas and wines are distributed among the attendees, after the religious service.