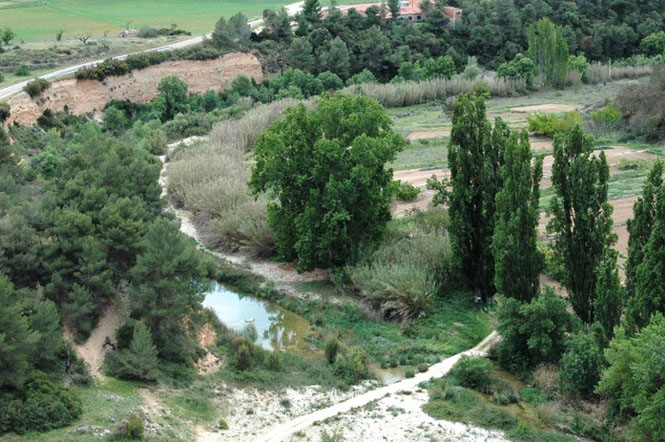 The Renaissance building dating from 1610 is adapted to the uneven terrain and is located at one of the medieval entrances to the town. The ‘Lonja’ (a porch) with two semicircular arches faces to the South.

This church may originally have been the castle mentioned in the population charter of Lledó granted by the Bishop of Tortosa in 1210. The rugged 14th century Gothic building was austerely decorated, with a square floor, a single nave covered by a pointed barrel vault and a straight head with a ribbed vault. Both were built of ashlar stone.

This fountain was adapted in 1915 so as to provide a service to the population, although it was already harvesting water before then. The structure is narrowed by a circular masonry wall to prevent the fountain from overflowing during floods. A stone basin is fitted to the wall, where the cavalry used to drink.

The Algars River, ‘cave’ in Arabic, is one of the Matarraña’s tributaries and passes along the border between Aragon and Catalonia, 70 km from its spring, in Paridora, to Nonaspe. The Algars riverbank is a landscape of outstanding biological value.

From the first half of the 18th century, this hermitage is in the Baroque style. On the first Saturday of June, it is traditional to celebrate a pilgrimage in this hermitage where after lunch there is a meal and several festive events.