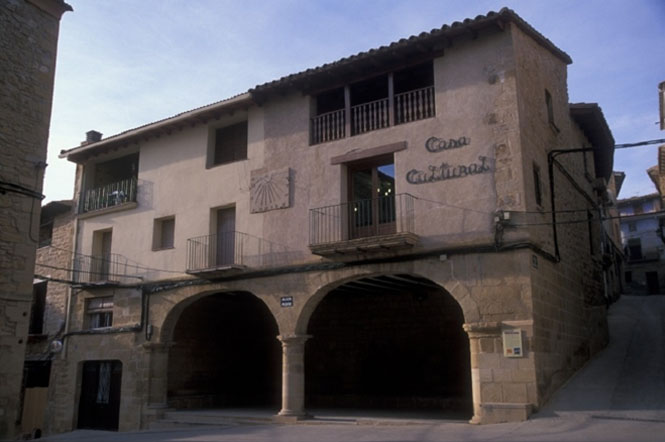 This construction, attached to the head of the church and dated from the 18th century, was a parish house. On the ground floor there is a huge room with a gorgeous staircase and two arches that enclose the prison rooms.

The new cultural centre was Valjunquera’s first town hall in the 18th century, and was later changed to be the priest’s house. The building has three floors and ‘la Lonja’ (porch) has a typical stone bench, known as ‘pedris’. The stone winepresses and the sundial are also outstanding.

The Baroque style hermitage is known as ‘La Mare de Deu’. It is located on the outskirts of Valjunquera, where the Calvary finishes. The structure is composed of a single nave with a barrel vault preceded by a gate in the form of an arch of triumph.

This church was built in the 18th century in the ‘pilarista’ style (Baroque tendency to build upon a rectangular base). Its highlights are the front-altarpiece carved in stone and the bell tower crowned by a red steeple.

Hermitage that combines two artistic styles: Renaissance on the outside and Baroque on the inside, and is covered with large stone slabs. The shield of its façade recalls the noble family that sponsored it.

It was an independent municipality until the mid-20th century when it was added to the town of Valjunquera. During the Civil War, the town was almost destroyed and there were only two or three families living here. He also suffered from the vicissitudes of the other wars that affected the territory as the first Carlist Wars (1834). In 1996, this nucleus served as the setting for a film set in the theme of the Civil War.